neXt Curve attended the World Internet Conference 2018 in Wuzhen, China’s premier conference on the digital economy and policy, which took place from the 6th to the 9th of November.  This year’s conference was sparsely attended by U.S. tech giants such as Apple and Google, but their absence did not put a damper on the global scope of the event and its continued promotion of the Digital Silk Road and China’s vision for the global, connected, digital future.

Here are our key takeaways from our second year covering this event: Artificial Intelligence at the Forefront of Digital China Discourse

Digital China is A.I., at least for this year.  Whether you were in the exhibition hall, the conference breakout sessions or plenary sessions, you got the very strong impression from the Party that the future of China’s digital ambitions are rooted in A.I.  It is a logical progression from Big Data, which was one of the hot digital themes last year along with Blockchain.

As expected, there was no shortage of companies touting some form of A.I. identity.  Whether their A.I applications were commercially ready and viable was suspect as we observed less-than-optimal outcomes especially from companies demoing A.I.-based health applications and a wide range of surveillance applications. 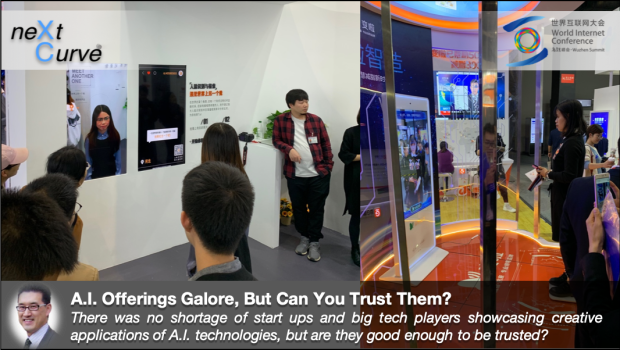 What do you call artificial intelligence that does not produce the right answers or results?  Artificially dimwitted?  One of the hundreds of facial recognition demonstrations tagged my colleague as being approximately 27 years old – flattering but exactly 100% off the mark. The danger of A.I. will come from amateur designs and implementations, which seem to far outnumber compelling, quality offerings.  This is a people problem, not a problem with A.I. technology. It was abundantly clear that enterprises and consumers need to carefully qualify the people, the competencies and intent of those who design these A.I. systems and restrain themselves from trusting in systems that are obviously far from worthy of our trust.

There is no question that the Chinese government at every level is a big fan of digital technology and views the realization of a next-era digital infrastructure to be a critical enabler of China’s continued industrial innovation, economic evolution and eventual leadership.  The central Chinese government continues to press provincial and local governments to aggressively drive the adoption of digital technologies such as A.I. and cloud computing to promote the objectives of Beijing’s Internet+ industrial initiative.

Beijing is also encouraging and supporting the funding of digital government applications that will help monetize investments by public and private entities in ICT infrastructure and technologies such as 5G, Big Data, broadband services, and data centers.  For example, representatives from the city of Guiyang showcased special projects to develop government-sponsored data exchanges.  Party leaders believe that data services built on top of publicly administered, trusted data assets will spur entrepreneurship, business innovation and accelerate digital economic development while maintaining security and privacy – especially for the regional hospitality and retail industries.

Facebook and Google seem to have become the digital punching bags of the World Internet Conference this year.  The series of breaches of privacy and trust by these U.S. digital giants in the last couple of years fueled a crafted debate on the role and responsibilities of Internet industry leaders in ensuring the development of a “socially responsible Internet”.  As MEP Viviane Reding of Luxemburg stated during one of the closing keynotes, “Ethics count,” a sentiment that was broadly expressed by her fellow keynote speakers during the conference closing ceremony.

A number of the conference panel discussions addressed the global threat of fake news most prominently exemplified by the Facebook/Cambridge Analytica debacle and the alleged and proven uses of the Facebook social platform for the dissemination of Russian propaganda geared toward seeding discord and influencing elections in the U.S and many countries in the EU.  Several foreign and Chinese officials cited fake news as a growing threat to public trust and national security that all nations face.

We will continue to monitor how this narrative plays out in the future as it seems we are witnessing the formation of a platform based on growing concerns of “irresponsible acts” by leading Internet industry players and their implications on national security. At least at the moment trust and responsibility are the tenets du jour of the Chinese governments messaging for digital policy.  They will undoubtedly be key themes that will shape China’s evolving doctrine and vision for a “socially responsible” Internet in what was portrayed as an increasingly untrustworthy global cyber landscape.

Is the Internet failing?  This notion was expressed on a number of occasions by Chinese and foreign (including Western) keynote speakers and panelists alike.  What does it mean?  Is it what can be considered recent failures in trust and privacy?  Is it the astronomical personal enrichment of a few techno pioneers?  Is it the unequal availability of broadband services in rural areas versus urban centers?  These were some of the prominent shortfalls mentioned among a broad range of panel participants.

While last year’s World Internet Conference promoted the theme of openness established on top of President Xi Jinping’s inaugural platform of Internet sovereignty, this year Chinese moderators and party officials pitched the idea of reasonable and responsible governance of the Internet guided by the mandate of improved “prosperity” and “mutual benefit”.  Despite all the mentions, the details on how this Chinese variety of Internet governance would work were sparse.  It will be interesting to see how China influences the “mutual governance” of the Digital Silk Road and the collective digital infrastructure that could connect nations and economies along its path in the coming years.

Government Digital Savvy is on The Rise, But So is Digital Hype

The star technologies of last year’s conference – drones and virtual reality/augmented reality – fell precipitously down the priority list with a notably smaller number of companies showcasing applications of these technologies and few mentions in keynotes or panel discussions.  The Chinese government was heavily promoting anything A.I. or related to the Internet of Things, much more than they did last year at the Wuzhen Summit.  What the central government says goes and we can expect the buzz, excitement and investment channel into strategic A.I. initiatives that build upon China’s bets on Big Data.

In regard to 5G – easily the global digital hype champion of 2018 – the Chinese government, carriers (a.k.a. Internet operators) and digital industry leaders have ridden the learning curve together quickly as 5G test beds and early commercial trials unveil the realities and costs of deployment in delivering the lofty promises of the new digital infrastructure of ultra-high-speed broadband, near zero latency, and massively connected devices.

This year, there were frequent mentions of the need for viable digital business models that will enable the creation of new economic value and drive industry digitization.  The idea that technology alone is not sufficient to drive digital transformation seems to be seeping into China’s digital discourse – an indication that the Chinese government is maturing its understanding of the digital phenomenon and connecting the dots.

5G is Still Hot, But in Search of The Killer App – Telemedicine? A large number of industry experts, carriers and technology vendors who participated on the series of 5G-related discussion panels are starting to realize that banking on the autonomous car to drive the return on investments in 5G infrastructure might be a bad near-term bet.  It might not be that great of a long-term bet.  So, what is the 5G killer application?  This question was asked consistently across keynotes, plenary panels and session breakout presentations.  It seems that remote, real-time surgery is the new poster child for 5G.  Let’s see if this hypothesis survives the year as the industry continues to search for the 5G Messiah.

Unsurprisingly, the digital agenda in China is shifting as it responds to some dramatic geopolitical and geoeconomic developments of this year including what might be considered a Sino-U.S. trade war.  While openness and improved protection of intellectual property have been on the table for a couple of years as part of China’s digital economic development strategy, the Western world’s experience with fake news, state-sponsored hacks and election interference, massive breaches in trust and privacy by leading Internet players is bringing to question the principles and governance upon which the global Internet has evolved to date.

Business leaders will likely deal with emerging policies in China that promote what has been dubiously dubbed a “socially responsible” Internet.  Will China’s vision of a more responsible Internet find synergies with GDPR (General Data Protection Regulation) that went into this past May across the EU?  How will China influence and possibly define the governance of the Internet along the Digital Silk Road?  These are important questions that business leaders should ask as they consider their business dealings in China’s digital future.

The World Internet Conference is controversial, but it is an important source of insight into China’s digital economic narrative and aspirations.  Yes, the Chinese government is pushing and marketing their agenda through the World Internet Conference, but regardless of your view of the Chinese Communist Party can you ignore it?  As a global business leader, it behooves you to be aware of the mindset of the second largest economy in the world and a fast-evolving digital dragon.

For more insights, our picks for “tech that matters” and neXt Curve’s predictions for 2019, check out neXt Curve‘s Podcast Channel and the replay of our webcast.

Contact us if you would like a detailed briefing of our analysis of the World Internet Conference 2018 event and to find out more about neXt Curve‘s advisory services.

This site uses Akismet to reduce spam. Learn how your comment data is processed.