China’s journey toward becoming a digital economy is well underway.  Internet Plus is the vision and the framework that is guiding the digitization of China’s economy and the development of the next generation of digital businesses and industry models.  The epicenter of China’s digital industrial revolution – Wuzhen.

Early in December of 2017, neXt Curve had the distinguished opportunity to attend the widely publicized but generally unknown World Internet Conference (a.k.a. The Wuzhen Summit) in Wuzhen, a small touristy water town in the  middle of the Tongxiang municipality in the fast-growing province of Zhejiang.  We are talking about China of course.  Why do I say unknown?  Well, most folks frankly don’t know about the Wuzhen Summit like they do globally popular tech conferences such as CES, Mobile World Congress, and TM Forum Live.  Yet, it is probably one of the most important events on the topics of China’s digital future and leadership.

Admittedly, unless you speak and read Chinese you are going to struggle at this conference.  I had the good fortune of knowing a few Chinese characters and enough Mandarin to ask for directions to the restroom in between session breaks.  I also had the occasional benefit of a great translator. Despite the challenges with language, we managed to have numerous interactions with local and national Chinese and global vendors, several interviews and briefings with economic and industrial development leaders of the Chinese central government in addition to attending dozens of keynotes and panels.  In the end, neXt Curve arrived at the six key takeaways outlined below:

It’s a bit difficult to put your finger on what kind of conference the Wuzhen Summit is.  Is it a tech conference?  Is it a global or Sino economic development conference?  You get the impression it is a bit of both given the heavy attendance of Chinese government officials from local to central levels, and the packed exhibition halls showcasing Chinese vendors such as Alibaba and Tencent, and global technology players such as Microsoft, Apple, and Google.

Unlike MWC, TM Form and Mobile World Congress, the agenda is less about digital technology itself, more about how digital technology can enable a number of societal benefits themes, which is an interesting twist on the digital conversation – problem-focused and driven. We identified four predominant themes that shaped the digital economy (often referred to as Internet Plus) discourse and messaging at the Wuzhen Summit.

The Wuzhen Summit has been characterized by some Western media outlets as a forum sponsored by the Chinese central government to promote and globally legitimize its controversial Internet policies represented most famously by the “Great Firewall of China.”  Though the word “openness” was thrown around quite a bit in relation to the Summit agenda, the kind of openness that was being referenced was a Chinese interpretation and application of the idea and term.

Over the last forty years, since Deng Xiao Ping sponsored the establishment of “special economic zones,” a small fishing village of 60,000 residents called Shenzhen in the southern Chinese province of Guangdong developed rapidly to become a megalopolis of 11 million and became the world center for electronics manufacturing that it is today .  Not only does Shenzhen represent a wildly successful experiment in controlled capitalism with a Communist Party twist, it represents an important first step in the industrial and commercial openness of China. 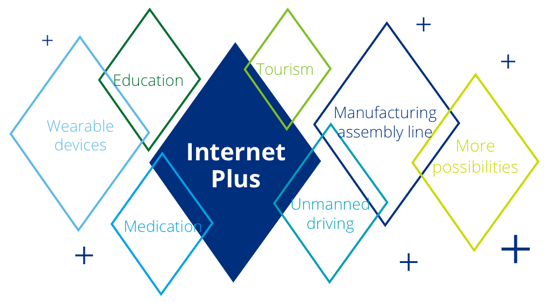 Internet Plus is a key industrial framework and initiative commissioned by Chinese premier, Li Keqiang, in 2015, which is a concept similar to Germany’s Industrie 4.0 and the U.S. version, the Industrial Internet.  Internet Plus extends beyond manufacturing and smart factories across a broader range of industry digitization topics such as connected healthcare, digital hospitality and tourism, and digital education.  The Internet Plus initiative is expected to usher in a new era of industrial openness that will foster the development of China’s digital economy.  How Internet Plus contributes to an open internet in the Western sense is yet to be determined and seen, but it will likely be a balance between what China calls national “Internet sovereignty” and mutually beneficial economic openness.

Those of you who are familiar with South Korea’s economic development will find China’s current economic development initiatives similar in intent and strategy as the Saemaul Undong (exercise) instituted by President Park Chung-Hee in the 70s.  As the coastal economic centers of Shanghai/Hangzhou (The Golden Triangle) and Guangdong (The Pearl River Delta) continue to prosper, the central government is heavily pushing investment into tier-2 and tier-3 cities to modernize their economies and drive industrial develop out into the rural areas in the Eastern regions of China.  This strategy will likely renew and expand China’s base of low-cost manufacturing as the digital economy moves East toward China’s poor rural areas; a strategy that nicely supports the broader “One Belt, One Road” initiative.

If you go to China frequently like I do, you are astonished by the velocity of change.  The application and adoption of technologies, new engagement models, new digital services by the Chinese consumer provides businesses with a dynamic market environment to test their offerings and scale quickly.  We had a chance to speak to several of the local vendors based in Tongxiang about their perception of the local and broader Chinese market.  “Why go anywhere else?”  Very few local companies, in fact none, had their sights on markets outside of China.  According to the vendors that we spoke to, the Chinese market is exciting, massive and provides a great environment for digital innovation.

The combination of hyper market velocity, resource constraint-driven societal mandate for change (better life), and government proclivity and ability to institute drastic industrial and infrastructure transformations enables China to leap frog “conventional” industrial and infrastructure models.  While we in the U.S. debate the virtues and viability of electric vehicles, China is already leading the EV market and industry in a very visible and practical way.  They are making it happen, and digital innovators will likely find great growth opportunities in China for their ideas, products and services.

Business leaders need to consider the rapidly changing economic environment and priorities in China and the implications that they have on what a viable go-to-market strategy looks like.  “Conventional Western” approaches rarely lead to success as does perceiving market opportunities with a “Western” lens.  Business leaders also need to follow Chinese government investments and tune into the industrial and economic objectives of central, provincial and local governments in order to find success in China.

Start ups and entrepreneurs will have new opportunities to accelerate their businesses by tapping into the fast flow of the Chinese consumer markets, which are adopting digital products and services at a pace that exceeds the Western markets in a very visible and palpable way.  Take advantage of China’s evolving openness as they progress their digital economy.

This material may not be copied, reproduced, or modified in whole or in part for any purpose except with express written permission or license from an authorized representative of neXt Curve. In addition to such written permission or license to copy, reproduce, or modify this document in whole or part, an acknowledgement of the authors of the document and all applicable portions of the copyright notice must be clearly referenced.

PrevPreviousThe Future of The Car: Before We Give Up Our Steering Wheels
NextRetail/Hospitality Industries Digitally Transformed: The Next Mobile Carrier Killer AppNext

If you would like to engage with a neXt Curve analyst on this topic, please:

If you would like to be notified of our latest research by email, please:

How the Edge Cloud is Shaping the Future of Computing

The Rise of the Edge Cloud

Snapdragon – One Roadmap to Rule Them All

What is Edge Computing?

Send us an email